One of my favorite superhero films is the most recent Wonder Woman film starring Gal Gadot. I’m a huge fan of movies with strong females as the leading characters. I feel that girls everywhere need to be able to see powerful women in stories on screen, stage and in literature (and yes, I include comic books as a kind of literature). Something about this movie that I really love which often goes overlooked is the partnership between Gadot’s and Chris Pine’s characters. Pine’s character, Steve Trevor, serves as the secondary hero of the story, as well as the love interest to Diana. What I love about their dynamic is the two need each other throughout the film. There are clear moments when they both in danger, but they work together to save one another. While Wonder Woman is the obvious hero of the film, she does not save the day single handedly. The screenwriter could have easily taken the story in that direction, but they made the refreshing choice of showing a woman and a man exhibiting a healthy partnership.

I’ve always been a pretty independent gal. I’m one of those stereotypical first-borns with that “natural leader” curse, which is a nice way of saying I have a tendency to be bossy. I tend to find myself in positions of leadership, and to be quite frank, I really enjoy it. I like taking care of other people, solving problems and getting others to unify. However, there have been times where it has gone to my head. I became more focused on the title rather than the responsibilities I had to others. I wanted to be important, but lost sight of what leadership is truly is about. Over the past six months though, I feel as if I have discovered the key to effective leadership: knowing how to be a support.

A prominent example of this in my life is working in the scene shop at my college. Backtracking a little bit: I used to work at a wedding venue as a server/dishwasher. This required a lot of heavy lifting, and I went out of my way to do as much of the lifting as I could without asking for help. It made me stronger, and at times, it was kind of fun to surprise the boys I worked alongside. Jump forward to about three years later, I have found myself working in set construction and maintenance in Potter Theater. When I first came in, I felt the need to prove myself. I also felt like I needed to show I didn’t need help with tasks that other workers (mainly the guys) were asked to do by themselves.

Here’s the deal though: I did need help. Like, a lot of help. I still do! And it’s not just with heavy lifting. Sometimes I have no clue what I’m doing on a construction project. Other times I need an extra set of hands to hold things in place while I try to drive in a screw. And don’t get me started on how many times I’ve had to ask someone taller than me to reach something on top of the lockers.

I found myself in a work environment where I had to acknowledge the fact that other people were just as capable, and oftentimes more so, than I was. One person in particular who was (and still is) far more versed in the technical aspects is Ben. My first impression of him came from me wandering into the shop to help with School House Rock: Live! and seeing him putting together a flat by himself (“Okay, that took me about an hour and a half and it was the WORST”). Over the course of the rest of that school year, I picked up new skills as I worked on different projects. The most valuable of these skills wasn’t how to put together a platform or a set of stairs. It wasn’t how to sweep a stage or how to properly clean a paint roller. No, the greatest thing I’ve come to learn is how to be a support (bet you never saw that coming from the title of this blog).

Ben and I have been working together on various odd jobs for over a year now. More often than not, he has been the one to lead the projects due to the fact that he is more knowledgeable and is a lot stronger than I am. I’ve had to accept the simple fact that being a helper to someone can be just as satisfying as being the leader. From that partnership in the shop, we formed a strong friendship that stretched its way outside of the theater and has been a wonderful constant in my life.

To the people who don’t go to school with me, I ought to probably mention that Ben is also my boyfriend. After a rocky year of relationship and personal drama, the two of us came closer together and realized our partnership could possibly work at a deeper level.  A major change in myself that I have noticed is that I don’t feel the compulsive need to be in charge of everything 24/7 anymore. It’s an odd feeling, but also a relief as well. It’s more fun to share the load with someone rather than trying to pile it all on yourself just so you don’t have to rely on another person.

I won’t claim that I’ve lost my drive to lead. Quite the opposite actually: I feel that the more I have learned to support people like Ben, the better understanding I gain on how to effectively serve others as a leader. The past few months in particular have been full of really hard life lessons, but I am thankful to have the support of friends who truly want the best for me and the opportunity to support the people I love and respect. I believe that the best leaders are the ones who don’t think of themselves as above the ones who follow them, but the ones who are willing to get down into the thick of things to work alongside those they lead. Learning how to do this well is going to be a life-long journey full of screw-ups, but I am eager and expectant to grow this vital skill. Isn’t it wonderful though, that we never have to stop learning? 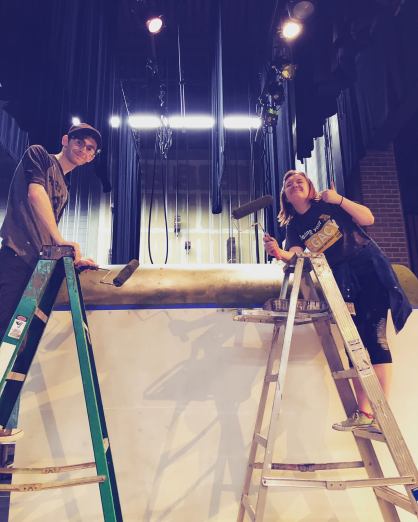