Ever since I can remember, I have been a theatrical person. When I was younger, my parents had me try sports but nothing ever stuck. My mom and dad didn’t want to force me to do activities I wasn’t interested in, so I was never a top athlete by any means. However, in elementary school, I always had a blast with our yearly musicals. From kindergarten to fifth grade, I participated in the class musical. I would usually get some sort of featured roll, but it wasn’t until fifth grade that I got a “lead.” Around this time, I also started participating in a community theater group called Christian Youth Theater. My family was originally only going to participate in one show, but by the time I graduated from high school, I had over thirty acting credits under my belt via CYT.

If you had told me when I began my time at Missouri Western that I would be playing a role like Polly Baker in “Crazy for You,” I would have laughed. While I have had the opportunity to play major roles in musicals, I had never been a leading lady. More often than not, I was the goofy sidekick character who would be the comic relief for shows. I had done extensive dancing in shows before, but long duets with a leading man? Nope, not me. The only time I ever got close was with “Beauty and the Beast” when I read for Belle at callbacks and was ultimately cast as Lefou (which was an absolute blast). In high school, it seemed like only a handful of girls were cut out to being the leading ladies, and I wasn’t one of them. I was a funny girl, which was just fine with me.

Fast forward to my second to last semester of undergrad. I had just come back from a summer of recovery after a rough semester. I was a little wary of auditioning for a brand new director, but I had been told by multiple KC friends that Sarah Crawford was an amazing person to work under. I continued my streak of flubbing the words on each of my Fall semester audition songs (which horrified and astounded several freshmen). Callbacks were a nerve racking blast, and I must say, I have never left a dance call more confident that I did a good job. Waiting for the cast list was awful. When that list went up on the call board though, I was shocked and over the moon to see “Polly Baker” next to my name. 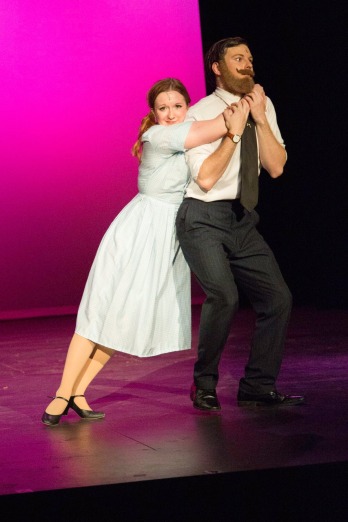 Sarah is unlike any director I have ever worked with. She is larger than life but still down to earth. She exudes confidence with grace and humility. She’s the kind of person who demands respect without ever having to verbally ask for it. I wanted to please her, but not in a way that I just wanted her to like me. I wanted to please her because I knew she knew what she was doing and if I got a thumbs up from her, that meant I was on the right track.

Getting back into the “musical theatre” actor mindset was a bit difficult for the first few weeks of rehearsals. I had received amazing technical training from a previous professor that truly helped me get grounded in straight play and film acting. Sarah was constantly telling me to raise the stakes with my character work. She even once said, “You’re too ‘on camera.’ This is musical theatre; I need BIG!” There was almost a bit of fear in going bigger. In the past, I’ve had certain people tell me that I was not believable on stage. I was worried that I would be too much, but Sarah promised that she wouldn’t let me look foolish on stage. She instilled a trusting relationship between the two of us right off the bat and I knew that she genuinely wanted to make me a better performer. 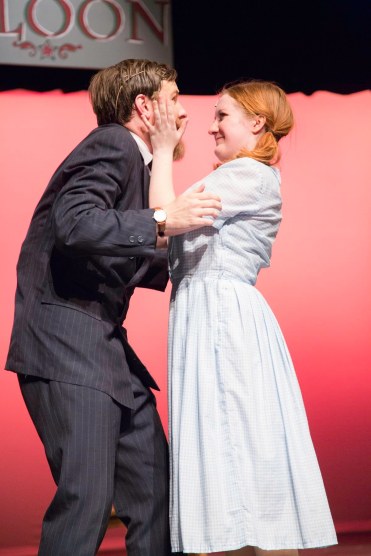 Working with Dr. Paul Hindemith is always a joy, but this show was extra special. I have been studying voice with Paul for almost two years now and it is astounding how far I have come over our semesters together. The techniques I have learned have helped me produce music that I ever thought was possible to come out of me. During this show especially, I learned how to maintain consistency in performances, even if I was exhausted. Before college, I didn’t know how to properly take care of my instrument, but now, I have gained the confidence that I could take care of myself for multiple weeks of shows. Anytime I can make Paul smile because of my singing is a blessing. I cannot thank him enough for the skills he instilled in me to do Polly’s track every night. 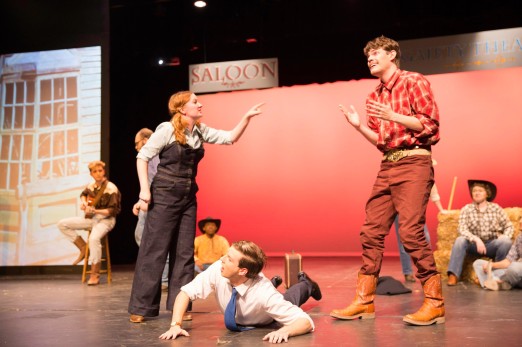 I worked opposite a transfer student named Ray Clark. My first impression of him was him wearing a full Scottish get-up to the TCD Meet & Greet, kilt and all. I thought he was a dork. When we got cast as Polly and Bobby, I was keen on becoming pals quickly. Full disclosure: I was stupid nervous about kissing him on stage and was a bit of an awkward potato until after we finally got it over with for the first time. As the weeks progressed, Ray and I established a strong bond between each other that made us wonder if we were long lost siblings. We would yell and whine about our dance steps while we practiced together. After an hour of practicing, we would rejoice together at the progress we had made. He was a trustworthy scene partner and someone I knew who would take care of me on and off stage. Now, he’s become one of my best friends! Funny how things work out.

There were other moments throughout the process of this show that will make it unforgettable. Libby Denny and I were able to bond more than we ever had before. I got to invest in the new freshmen by showing them the ropes of our department. I got to aggressively kiss Sweet Ben in Act 2 every night. It was a bop. Above all though, playing Polly Baker showed me that I am not limited as an actress. I am capable of playing the roles I told myself I wasn’t pretty or talented enough to play. I am so proud of myself for not giving up. Walking in Polly’s shoes for six weeks helped me gain back the confidence I once had as a musical theatre performer tenfold. While the show was full of obstacles, it is a show I will forever be grateful to have been in at Missouri Western.

On our second to last performance, I left the stage after bows knowing that the previous two and a half hours had been the best performance of my life. All of the struggles, nervousness and juggling of homework and rehearsals was worth it. I was reminded of why I chose this path of study. The arts help us express our human experience. Even with a show as silly as “Crazy for You,” we are able to express childlike hope that making art will fix our problems. While that may not be the end-all-be-all solution to the world’s struggles, I full-heartedly believe that there is a special kind of joy that only theatre can bring. Being a part of this cast and crew made me realize this, and because of that, I will never look at the performing arts the same way again. 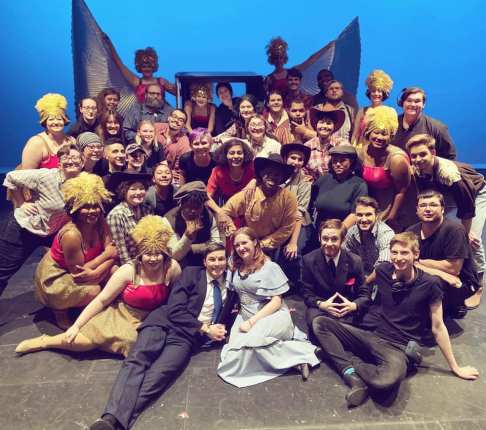