Unless you were living under a rock in the mid-2000’s, you probably heard the term, “twilight” thrown around all the time. It wasn’t because society had suddenly found interest in this specific time of day; it was due to the wild popularity of Stephenie Meyer’s romance series Twilight that had recently begun being adapted to film. I was ten years old when the first film was released, but I remember clearly my middle school friends all gawking and fangirling over either the guy who played the vampire or the guy who played the werewolf as the movies gained popularity. Fast forward to my almost 21-year-old self, who has just recently completed the book series and has a few thoughts on this polarizing saga.

First though, a bit more background. I grew up in a Christian household with loving parents who knew I was an avid reader that inhaled stories. However, as Meyer’s books began to rise in the ranks of pop culture, so did the Christian Blogger Moms rise to write against the story. The wrote posts saying that people shouldn’t be reading these books because they had *gasp* vampires in them (sparkly ones at that). My mom, wanting to do her best for her dorky middle schooler, didn’t let me read the book series. Personally, I had no problems with this. I wasn’t into romance and was more interested in my growing love for Star Wars. Ironically, after letting me read all the Left Behind books (which by the way, REALLY INTENSE), my parents allowed me to read Harry Potter as I would avoid reading the vampire books. So I guess, Thanks Stephenie, cause I really like the child wizard books.

Recently though, my mom decided to start listening to Twilight books on the Libby app, which is this nifty little thing that my local library is linked through. After listening to her talk about them for a few weeks, I rolled my eyes and started reading the first book before bed. Now, let me remind you all I am a full time college student and was working three jobs at the time when I started reading this, so it wasn’t until about two weeks after starting the book that I was able to focus on it over Thanksgiving Break. I had a long car ride and was able to finally get the idea as to why so many people liked the series. In an odd way, the mediocre romance between the klutzy human girl and the attractive vampire dude was fun and a way to let my brain relax and enjoy reading for fun again, which I haven’t gotten to do in a hot minute.

As finals creeped closer and life kept throwing massive curve balls at me, I began listening to the audio books for the last three books. Let me tell you, when you’re spending hours on end at a computer animating or walking about a half mile to the fine arts building every day, it’s nice to have an engaging story to listen to through the day. Over the course of three weeks, I managed to complete the series and I can honestly say I don’t feel like I wasted brain cells on these books. Yes, the writing isn’t the greatest; we all know this. But it was fun and something I was able to use as an escape from what seemed to be constant chaos around me. And a lot of fun things came from me reading the books in my relationships. 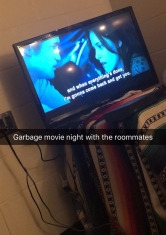 Twilight is not a masterpiece. However, the themes of sacrificial love and the power a woman has truly were inspiring to both read and watch on screen. Granted, I am thankful I did not read these in my formative years. The obsessive love between Edward and Bella is *not* healthy in the dating stage of a relationship. Our culture is saturated with the idea of the “perfect partner.” Think of Jim in the hit TV show, The Office. He’s the dream guy, right? He’s funny, cute, charming, smart, chases after the girl he’s in love with… and has a script. People don’t talk like they do on screen or in books. There are times when we can get caught up in looking for the picture perfect match when we really need to be searching for the other flawed human being that can weather the storms of life with you faithfully. However, the love that Edward and Bella share is a love that should be strived for with your spouse. While it takes time to achieve, this love comes after intentionally learning the other person, through better or worse. On top of all this, Bella is not a damsel in distress. In all four books, she is the hero who always puts the needs of others above her own. She and Edward complement one another, working as a team when things get tough, but in Meyer’s narrative, the author shines a light on how powerful a woman can be. I feel that the books do a wonderful job of showing that a woman can be powerful while also working alongside a man, which is how God intended us to function in our married lives.

There’s so many more words I could write about this series, but I will choose to leave it here for now: a fun adventure I dove into during a hard time in my life. And hey, finding biblical truths from books about blood sucking dudes that sparkle in the sunlight? Not a bad way to spend Christmas break. Twilight made me excited about reading again, and I look forward to spending more time enjoying a pastime that has shaped me into the person I am today.

P.S. Alice is the best character in the whole dang series and I will fight anyone who tells me otherwise.